By clicking on the following link you declare under your own responsibility to be an HCP in EU and to accept the conditions here above described. 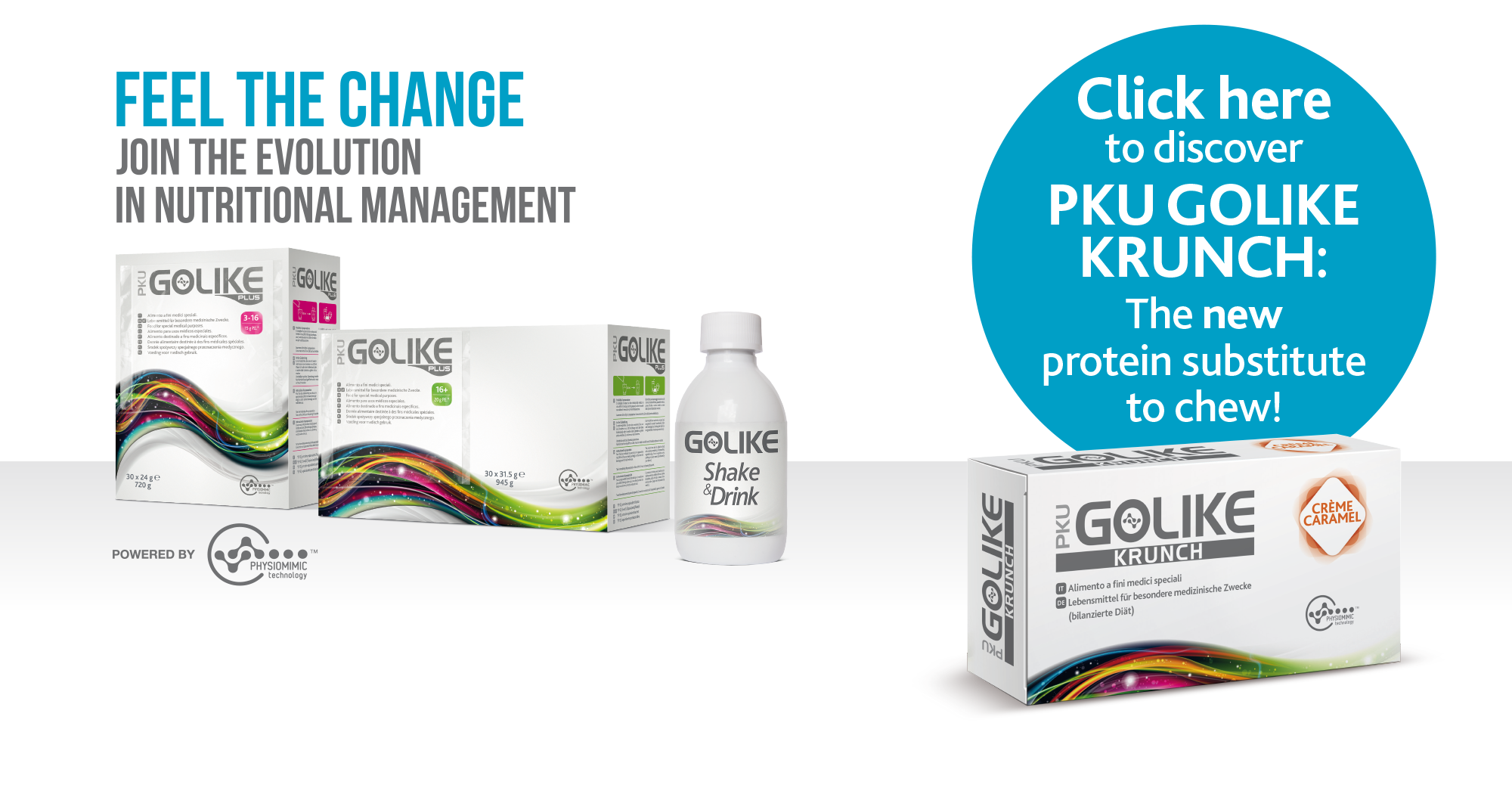 Nowadays, the standard of care for phenylketonuria (PKU) is mainly based on two essential pillars: a lifelong low protein diet (that limits Phe intake from foods) and protein substitute administration (to support physiological protein synthesis)1,2.
The main objective of the treatment is to maintain Phe levels in the recommended range, and the efficacy of the treatment is strongly influenced by compliance to the prescribed diet. As seen on evidence, compliance becomes increasingly difficult with age due to diverse factors. Bad taste, odour and aftertaste of amino acid-based protein substitutes are still a big issue that generate an important number of adults out of diet3.
Moreover, scientific evidence indicates that significant sub-optimal health outcomes still exist in compliant PKU patients6. This is mainly due to the absorption profile of free amino acids (AA), which is very different from that of intact natural proteins. Free amino acids bypass the digestive phase giving place to plasma levels of amino acids that are higher, peak faster and decrease more quickly1. Thus, the diverse kinetic profile of free amino acids has an impact on body metabolism and consequently affects the health of people with PKU1.
That is where PKU GOLIKE comes in!
PKU GOLIKE is a brand-new food for special medical purposes (FSMP) for a real change in the dietary management of phenylketonuria.
PKU GOLIKE is a Phe-free amino acid mix in granules, characterised by prolonged release and physiological absorption of amino acids, while masking their unpleasant taste and odour, as well as preventing aftertaste.
PKU GOLIKE has been developed with a rigorous pharmaceutical approach, with the ambition of significantly improving health status and quality of life of people living and dealing with PKU. 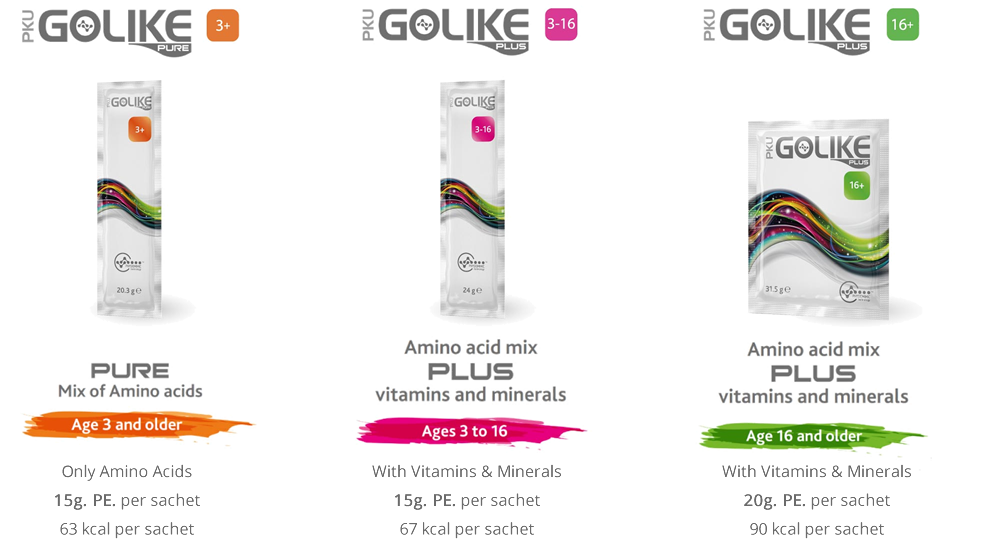 PKU GOLIKE is featured by its flexibility in its mode of use. Thanks to its formulation in granules, PKU GOLIKE is able to mask the typical unpleasant taste of AA and can be taken on its own or mixed with food, both sweet or savoury.

PKU GOLIKE is not flavoured and therefore it allows to perceive the original and native taste of food when it's mixed in. The possibility of feeling the real and original flavour of foods may help to maintain the development of an unaltered sense of taste.

PKU GOLIKE, thanks to its technology, is made up of insoluble granules. This means that PKU GOLIKE does not dissolve when added to warm and cold foods and drinks. Hot liquids or heating up the granules must be avoided to keep their stability and features unaltered (improved palatability and physiological absorption).

One sachet of PKU GOLIKE can be used for different preparations within 24 hours. PKU GOLIKE should be added to food right before consumption in order to preserve the integrity of the granules and all its properties.
More suggestions to discover new combinations: NEW Top Tips on how to use PKU GOLIKE with food and drinks or with GOLIKE Shake & Drink.
(**) PKU GOLIKE must be used under medical supervision. The daily dose is prescribed by the doctor or the treating clinic and is based on age, body weight, health status and the patient's special circumstances (pregnancy and lactation).
The differentiating features of PKU GOLIKE (taste and odour masking, aftertaste prevention and physiological absorption of amino acids), come from the application of a patented technology: Physiomimic Technology™ .

PKU GOLIKE is powered by Physiomimic Technology™ , a pharmaceutical technology that, for the first time, has been applied to a food for special medical purposes.
The Physiomimic Technology™ consists of a multi-step process of granulation and coating. In the coating phase, a dietary fibre is used to completely cover the granule.

The special coating layer acts as a barrier, significantly masking undesirable organoleptic AA characteristics, such as smell and taste, as well as preventing aftertaste. An improved palatability increases acceptance and supports compliance to the treatment, therefore, contributing to a better nutritional management and a better patients' quality of life3.

In the same way, the coating allows a prolonged release of the AA contained in the granule over time. This modified kinetic leads to a more physiological absorption in the direction of intact natural proteins, supporting consequently a more efficient AA utilisation. The physiological absorption of AA could support anabolic processes and contain catabolic episodes, reducing the fluctuations of Phe in the blood and consequently offering potential health benefits for people with PKU 1,2.

PKU GOLIKE was developed with the aim of proposing an evolution in the nutritional management of PKU, improving both the metabolic control and the quality of life linked to diet management.
Thanks to a development process with pharmaceutical standards, PKU GOLIKE guarantees a more physiological absorption of AA and an improvement of their organoleptic characteristics.
The research and development process included various stages to deliver a prolonged release technology, as well as In Vitro and In Vivo confirmation to scientifically prove physiological absorption of amino acids.

The first phase of technology development verified the prolonged release of amino acids through in vitro test. The dissolution profiles of different engineered prototypes and that of the equivalent free amino acid mix were compared under the same dissolving conditions.
The main output is: 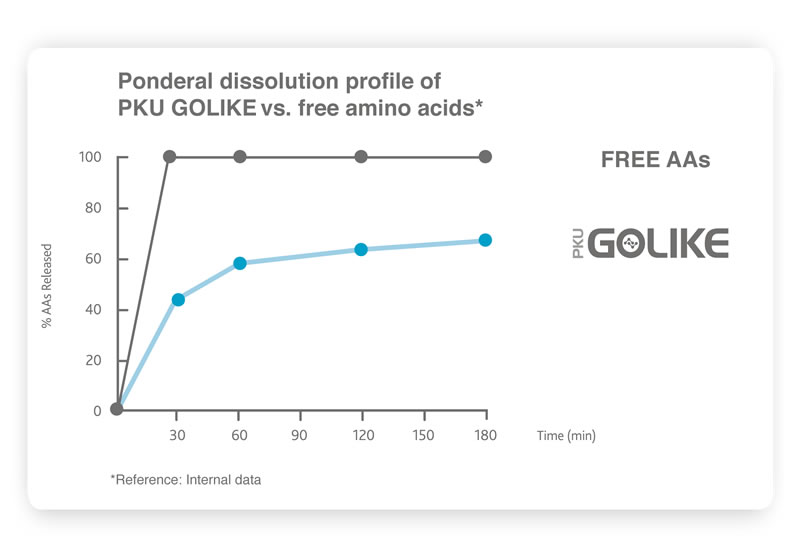 The pre-clinical phase wanted to confirm that the prolonged release of amino acids leads to more physiological absorption and better metabolic control in animal models. This hypothesis has been confirmed thanks to the following studies:

In conclusion, Physiomimic Technology™ provides prolonged AA absorption kinetics that supports a physiological absorption as well as more physiological levels of AA in the body in line with intact natural proteins. 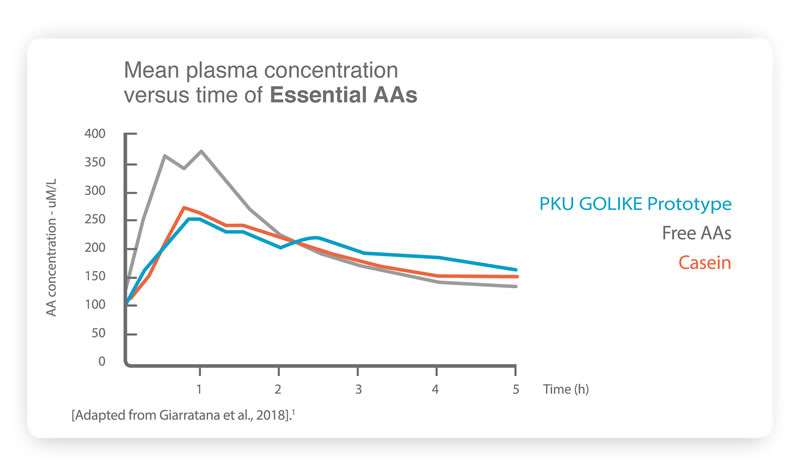 2. Metabolic parameters: How AA with Physiomimic Technology™ are used by organism5.
The objective of this trial conducted on healthy rats was to evaluate some parameters involved in the metabolism of amino acids and related to the absorption kinetics. The parameters analysed were BUN (Blood Urea Nitrogen) which represents an AA waste product, and the glycaemic curve.


The results of this study confirm that:


As a conclusion, the results of the study suggest that prolonged absorption of AA, imitating the physiological absorption kinetics of intact natural proteins, may lead to improve nitrogen assimilation in proteins and maintain normal blood sugar levels. This suggests better metabolic control. 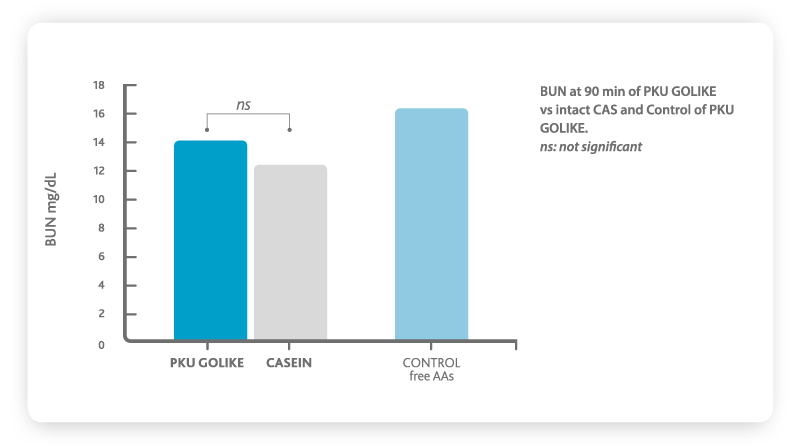 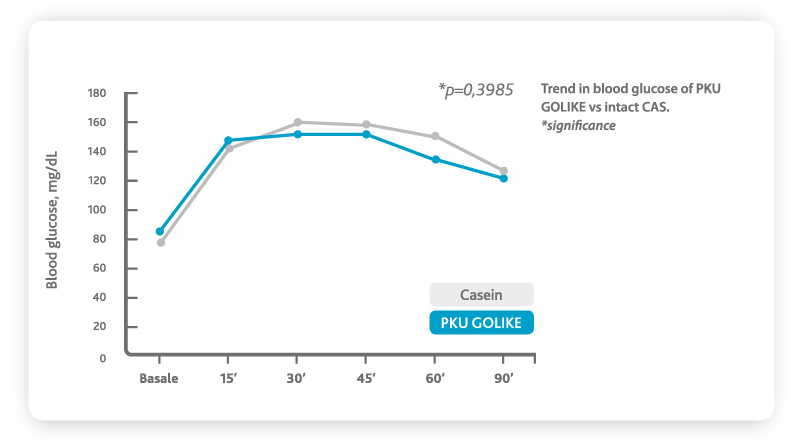 
In line with our pharmaceutical experience and our ambition, new in vivo trials will soon be available to illustrate the impact on metabolism of physiologically absorbed amino acids and their potential health benefits.